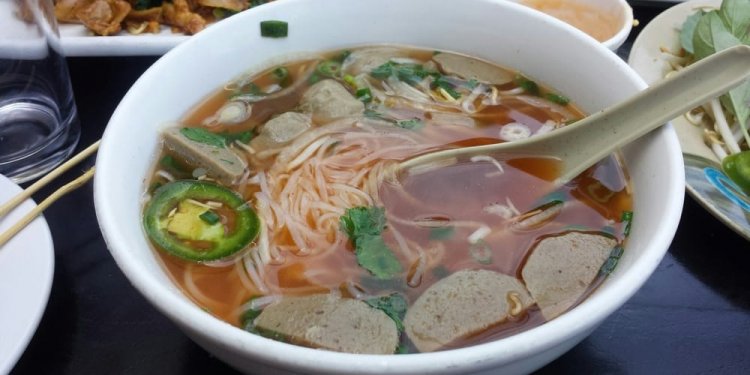 This is part of the group that runs both Indochines. It's similar to those restaurants, with a focus on Pho as their main specialty. You can order a range of choices, from brisket, tripe, meatballs, and more. Pho is not for everyone, so they have other options such as phad Thai, phad see ew, and fried rice. I'm not a fan of Pho, but I do like their phat thai with shrimp. The servers are friendly, but aren't as attentive as the servers at Indochine. Make sure to get the Groupon, which is $18 for $30 worth of lunch or dinner.

Here's what I do: I bookmark a business, over the course of a couple days (sometimes weeks) I go through the pictures/reviews multiple times and then I eventually try it for myself. This place had me on the fence and once again I called Phò Forever and he was closing early!!! We walked in and were halfway greeted and seated by a woman that didn't say much. Then a man came to our table about 5 minutes later and took our drink order. Never a smile or that little small talk that makes a customer feel welcomed. He did let me sample a wine before I made a decision and that was a plus, but once I saw how friendly he was with the other tables it didn't make me feel very comfortable. Every customer should be treated with the same enthusiasm as the next, PERIOD! We ordered our food and the fried dumplings and standard Phò were both very good. The flavor of the broth was amazing and after I squeezed some lime, siracha and hoisin and added bean sprouts, jalapeño and mint it took it to the next level!! I can't say rather or not I'll be returning. Happy Yelping..

This place was great!! We had a bowl of pho, potstickers, and the chicken balls (forgot the name). Everything was delicious.

The worst pho place I've ever been to. It doesn't really even taste like pho. This is faux pho!!

Had lunch here with some co-workers. This is not one of my favorite Pho places for pho but wanted to try their Phad Thai so I went. Pho noodle bar has a nice decor and I love sitting at the bar like tables. They are quite comfortable. I ordered the Phad Thai chicken with a #3 spicy. The dish is rather sweet and the thin noodles and chicken were well cooked. I love Thai cuisine. I would have liked a little more peanuts added to dish. I'm sure I'll be back here but it won't be anytime soon.

Yummy noodle bar! I just grabbed some lunch from Pho noodle bar and it was very good. I got the duck noodle soup. The portion was huge! The broth was very rich with flavor. Now they don't give you an option for spice level with this one so ask for some Sriracha...just don't spill it on your white coat like me! It comes with a great vegetable selection which is why I chose this one...plus the thought of odd beef parts in my soup scares me a bit. The soup had lots of baby bok choy, bean spouts, onions, and your standard cilantro, mint, and scallion flavors. I was given a heaping portion of vermicelli noodles and a decent portion of duck breast. The only negative is this is not the order for take out lunch which I didn't even think about until I got back to work. With Korean and Thai soups you basically add your ingredients yourself...so it wasn't easy making this in our kitchen back at the clinic. Next time I'll try some pad thai or fried rice.

This used to be my favorite restaurant. I went there sometimes 2x a week. You could order extra tofu for $0.50 and it made the vegan pho so amazing. The service was awesome, very quick and one waiter was especially personable and helpful. But the tables turned... I ordered the same thing as always - 2 orders vegan pho with extra tofu. It was usually around $20. I walked in to pick up and it was nearly $30! They started charging $4 for extra tofu (like 6 small pieces). I was then told by the less personable waiter that was the new price. I asked why he didn't tell me when I called and he seemed flustered. He waived it that time, but that's insane to pay $8 for less than $1 worth of tofu. You can tell the business is hurting because the service is now terrible, 2 of the best wait staff left for another restaurant, and the price gauging. :(