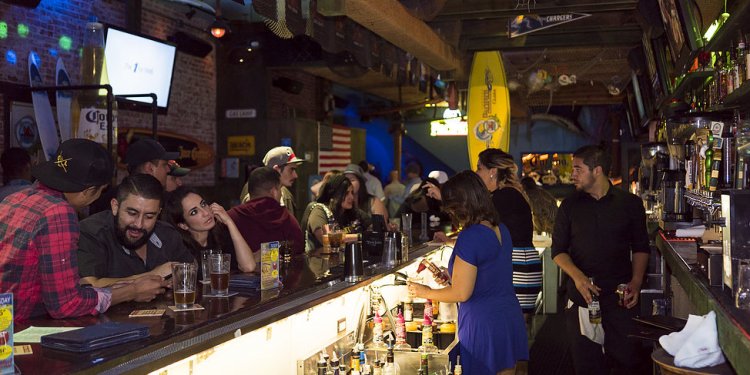 There are lots of ways to experience the incredible selection and diversity of San Diego's great craft beer. If you want to go directly to the source and visit the brewery tasting rooms, you're in luck; you've got over 100 breweries to choose from! Although this strategy involves covering a lot of ground, many areas of the county have become tiny craft beer "meccas, " where a collection of breweries have popped up fairly close to one another. Up in North County, Highway 78 has become known as the "Hops Highway, " because so many breweries can be found along the corridor between Escondido and Oceanside. Another grouping can be found along the Miramar and Mira Mesa corridor. Still others have popped up between downtown to the Interstate 8.

But what if you want to sample San Diego's amazing variety without traveling all over the county? Well, then, 30th Street is the place for you. 30th Street (which runs through neighborhoods of North Park and South Park) offers visitors an opportunity to try a little bit of everything—it's home to some of the city's best craft beer bars and best beer-friendly restaurants, as well as two or three actual breweries and tasting rooms.

Here's a sampling of some of the many beer-centric things you can do on 30th Street. It's a suggested itinerary that would never actually be done in its entirety, but it guides you from north to south with recommendations for stops along the way.

Fall may be young, but the folks behind it have been part of the San Diego brewing scene for a while. Previously, founders Dave Lively and Ray Astamendi (also brewmaster) were key players in the creation of St. Archer Brewing Company (which is in the Miramar area).

The spacious tasting room is light and comfortable, with shiny new fermentation tanks on display, plenty of seating, and a nice selection of crisp, clean, well-balanced beers to choose from. If the California Common (A Beer Named Sue) or the Coffee Stout (2AM Bike Ride) are on tap when you visit, make sure to get a taste.

Tiger! Tiger! is technically not on 30th Street, but it's only two doors down. And besides, it's so good, it has to be on any 30th Street itinerary! (Draft Magazine just voted it one of America's 100 Best Beer Bars.)

Big wooden communal tables in a casual, friendly atmosphere is how Tiger! Tiger! provides its patrons with a great selection of beers (about 24 taps) and a delicious menu of scaled up comfort bar-food (there are even some vegan options), with an emphasis on locally grown quality ingredients (their house-made sausages and Sunday brunch are awesome).

As a sister restaurant to Blind Lady Ale House (just north on Adams Ave), Tiger! Tiger! usually has at least a few selections from Automatic Brewing, which is made at Blind Lady. These beers, brewed by co-owner Lee Chase, are always outstanding, so don't pass them by.

Come out of Tiger! Tiger!, take a left, then another left at the corner. Forty paces or so, and you're at the Belching Beaver tasting room. This outpost of the production brewery that makes its home in Vista is a smallish space with plenty of seating and a bunch of counters that open out onto the street.

From the 15+ taps, you can choose from a variety of Belching Beaver brews, including nitro selections, seasonal specialties, and their perennial fan favorite: peanut butter milk stout.

With an impeccable lineup of more than 53 beers on tap (and an exhaustive list of bottles), Toronado has distinguished itself as one of San Diego's premier craft beer bars (Also recently voted one of America's 100 Best Beer Bars by Draft magazine). The casual and comfortable surroundings, along with the friendly and helpful staff, make it the perfect place to taste, explore, and experiment. If you want a well-rounded craft beer education, you need not look any further than the offerings at Toronado.

A casual café menu complements the liquid selections, with dishes that often incorporate or utilize craft beer. Toronado frequently hosts special beer events, including multi-course beer dinners and brunches that are some of the most interesting and delicious around.

Again, this is a little detour that's worth taking. Two short avenues east of 30th Street is Mike Hess Brewing. If you're looking for the brewery/ tasting room experience, here's another spot to try.

Hess' spacious tasting room is well-designed and offers the drama of being above the fermentation tanks looking down. The brewery offers a nice selection of beers on tap, and many are available to take home in cans or growlers.

Here's an option for those seeking a very beer-centric gastropub kind of experience, with a bit more upscale menu. Waypoint Public boasts 27 taps, many of them local beers, as well as an eclectic California-inspired collection of dishes that range from smoked swordfish crostini to braised short rib ravioli to the classic French cassoulet.

No San Diego craft beer experience or education is complete without a taste of something Stone. As one of the oldest, largest, and most popular craft breweries in San Diego, Stone has played a major part in making it known that San Diego is the world's best craft beer town.

At this location, you can stop in for some tastings, fill a growler, and shop a wide variety of cool Stone merchandise. Every Tuesday, a few kegs of a specialty beer are tapped and they're poured until there's no more left…

Here's a fitting place to end your craft beer odyssey: at another shining star in San Diego's beer bar universe (also voted numerous times by Draft magazine as one of America's 100 Best Beer Bars). Hamilton's 30+ taps and extensive bottle list are the result of owner Scot Blair's personal obsession with quality beer and the best of local beer. His longstanding relationships with hundreds of brewers has enabled him to offer patrons many rare and specialty beers that are not widely distributed elsewhere.

The atmosphere in Hamilton's is pure neighborhood bar: dark wood, low lighting, pool and shuffleboard tables, all provide a comfortable, friendly setting for anyone who happens in. Quality pub food, like their house-made sausages and great sandwiches, pair exceedingly well with the many styles of beer on offer.