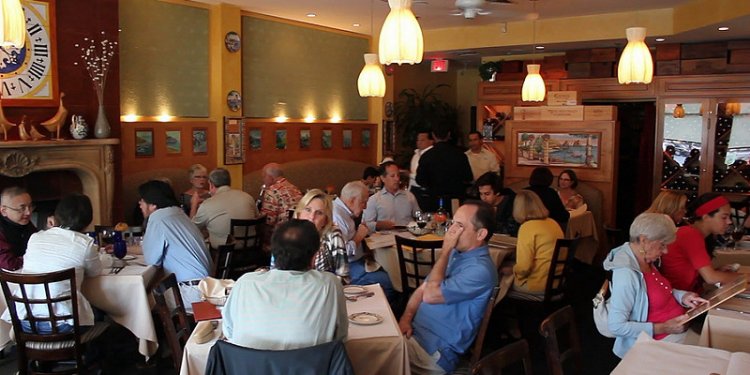 In my many years of dining out, I have never been stood up by a restaurant date, but there’s a first time for everything. My would-be escort intended to rendezvous with me at the new Villa Capri in Carmel Valley after his dental visit. He went home for a few minutes of shut-eye and didn’t awake until the next morning. I dined by myself and found the experience refreshing.

I hadn’t been to Carmel Valley for years. In the past, I found it a dizzying experience to endure the twists and turns in the road. The new Highway 56 makes it a breeze to turn inland. The eastern part of North County, once serene and low in population, is now brimming with glass-and-steel office buildings, many perched on hillsides. From the moment Villa Capri opened, in the same shopping mall as Spices Thai Café, diners who work in the area and word of mouth brought in throngs of people.

It’s operated by Salvatore Ercolano and Antonio Viscito. The former gave Bella Luna, with its moon decoration and superb cooking, to the Gaslamp. But a dispute with his co-owner left Salvatore in the cold. He is part owner of Come On In, a fine small family café on Torrey Pines Road, but he searched for over a year for a new location. He is from Capri, Italy, and he and his family have been in the food business for ages. For him to be without a large restaurant was like a dancer lacking a stage. It was serendipity when Salvatore ran into Viscito, who wanted to leave Scalini, where he was a chef, and start his own restaurant.

Viscito is from Amalfi, Italy. His cooking is smooth, subtle, without harsh edges. His sauces are a wonder — I kept searching for a spoon to lap up the mustard sauce that accompanied the shrimp appetizer and the pecorino cheese sauce for chicken Romano.

Since I expected the arrival of my friend at any minute, I ordered enough for two. Each course was a gastronomic ballet. Each ingredient in harmony and ravishing to the eye. Ordinarily I don’t select two appetizers, but Salvatore insisted that several order dinners and I sampled his proscuitto and caciotta cheese, which is a staple in the homes of Tuscany, and Salvatore prepares it himself in the manner of his father and grandfather. The cheese, placed in a mold, is creamy without being sweet, firm without seeming hard. It’s served with endive. The way to eat this appetizer is to pack cheese and thick slices of imported proscuitto into the pale yellow endive. When you bite into it you get three flavors at once. This is an appetizer that should be shared — one stuffed endive is enough to enlighten your mouth. The aforementioned prawns (gamberoni alla senape) are a marvel; prawns flamed with cognac are finished with shallots and whole-grain mustard sauce (both $9.95).

For my pasta dish I ordered tagliatele al salmone, a broad noodle prepared on the premises tossed with smoked salmon, vodka, and a touch of cream. This was one of my delights at Mama Anna’s, and it’s well-prepared here. Salmon with pasta is also a fine way to start a meal because it’s mildly salty. One order is enough for two or more.