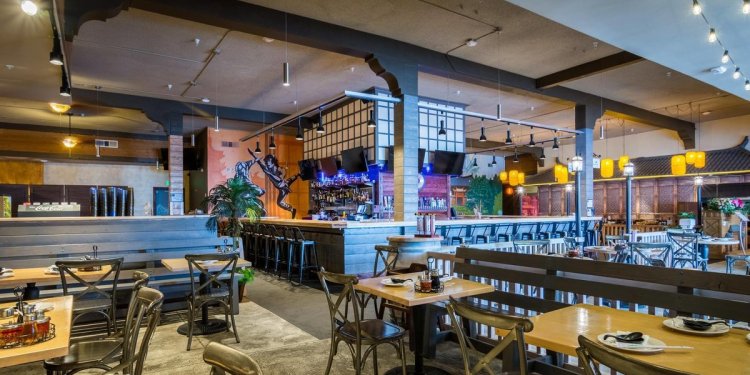 I had been wondering what was going on with Dumpling Hut since they closed for a spell. While keeping the Dumpling Hut moniker, the Chinese "name" had changed. The folks at Sizzling Pot King told me they had changed owners, but I hadn't seen any change of ownership notice. Still, even though my meals at Dumpling Hut left something to be desired, I was still curious, so I returned soon after they reopened.

Though looking around a bit you notice some interesting "features".

The place was really quiet when I visited. I was the only customer.during my entire meal.

I got to thinking that I'm probably the wrong "demographic" when my water arrived.with a twisted straw.

As for what to order, well, the "new" Chinese name had clay pot in it.

So deciding to play it safe, I ordered the Pork Chop Rice Clay Pot ($11.50). The young man working recommended getting it "spicy". It came out in a donabe style pot.which I've seen at Daiso for four bucks.in case you want one.

So, not quite "pork chop", more like spareribs, very tough, very salty, very one dimensional in flavor. The best item was the over cooked boiled egg. The broccoli was basically a garnish as it wasn't seasoned at all. The rice was fine; I think I would have preferred the "regular" as this was basically chili oil on rice; it was very greasy, one-dimensional spicy, some anise, and not much else. A lot of rice though.

Well, perhaps these were new owners, but the end result of my meal was the same.

Like my previous visit, we were the only folks in the place for the entire meal. I'm thinking this place is targeting a younger demographic after more snack like food and drinks.

Liked the nicely brown and crisp bottoms of the buns. The texture of the tops were gummy, chewy, and these didn't seemed like they were steamed right. The pork filling wasn't moist enough and was pretty darn bland.

Good lord, basically a wrapper enrobing ground pork, then put into a pan and cooked like basic pot stickers. This reminded me of stuff you'd have from the frozen food aisle. I mean, I really didn't expect, say QingDao Guotie, but this was worse than what I'd had here before. Greasy, too chewy, not good eats at all.

Not very much tripe in this one; but it was prepared decently; perhaps a bit too hard, but properly cleaned. The broth, while rather singularly spicy, with no numbing tones, looked to be bone broth based.

It was back to the "the norm" with the next item. Calvin grew up in the SGV, a mere short walk from 101 Noodle Express.so of course we had to try the Niu Rou Chuan; the Beef Roll ($6.99), which was just plain tragic.

Very dry, not pan fried enough, with a cardboard like texture; the "da bing" was terrible. What's with the lettuce? Smeared with standard issue hoisin, the thin piece of beef was fine...what there was of it.

Check out the "photo" of the beef roll in the front of the restaurant. Does not even look like the same dish.

And to add insult to injury; we liked the look of the Sam Sun Dumplings on the window.

These were very unsatisfactory; the wrappers were too hard and seemed to be typical store bought wrappers. The 1/3 piece of shrimp was fine, but this was underflavored. definitely not what I expected from a place like this.well based on the meal, I should have expected this.

I think this visit was worse than my previous visits under the "previous management". The food was quite underwhelming. I probably won't be going back.