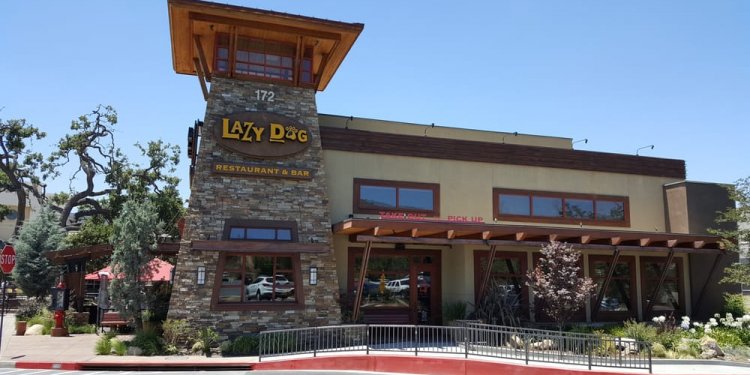 I hear a lot of talk about the “Next Generation” casual dining concepts that are reshaping the segment. Often the same names come up: Yard House, Seasons 52 and True Foods Kitchen.

Another to watch on the West Coast is Lazy Dog Café, a concept that is being rebranded as Lazy Dog Restaurant & Bar.

Late last November they opened a flagship location in Brea, Calif., that marks an evolution of the brand. The 9, 000-square-foot restaurant includes a 1, 200-square-foot kitchen that has become executive chef Gabe Caliendo’s test laboratory. And the restaurant has a chef’s garden where Caliendo grows everything from lettuce and herbs, to heirloom garlic and fruit.

Sounds more like a chef-driven independent restaurant, but we’re still talking about a chain here. And one that’s in line for slow and steady growth, with about two opening every year.

Simms said the name change was meant to better represent Lazy Dog’s positioning as a premium casual-dining player with a $16 average check that falls somewhere between The Cheesecake Factory and BJ’s Restaurants.

“We didn’t feel ‘café’ gave it the credit it deserved in terms of the sophistication of flavors, ” he said.

Caliendo’s mission is “approachable innovation, ” developing dishes that work with unique flavors in a way that won’t scare anyone off, like spicy Moroccan chicken and couscous or pan-roasted barramundi with cilantro pesto – the latter on the chain’s new “Nutritious & Delicious” menu with all items 650 calories or less.

Lazy Dog also does an enviable 20 percent of sales from the bar, so it’s no surprise the new name points to that strength.

Simms declined to share sales details overall, but he said same-store sales are “beating the industry by quite a bit.”

The Simms family also has other concepts in Southern California: the two-unit craft beer concept Simmzy’s; the restaurant M.B. Post, with chef David Lefevre; Tin Roof Bistro; and The Kettle.